Is a Cybersecurity Career for You?

The first Labor Day was celebrated in 1882 and was declared a national holiday in 1894. Since then it has become the unofficial end of summer, a day to score great deals on everything from furniture to vehicles, and a day for many workers to kick back and relax.

How did you get into a career in cybersecurity/compliance?

Cybersecurity careers have been around since the late 1980s with the invention of the first antivirus. Since then, the field has taken off with millions of roles and many specialties and niches. According to the U.S. Bureau of Labor Statistics, Information Security Analysts are expected to see a 33% job growth within the next 10 years.

Thomas Allen, Principal Consultant/Information Security Officer — I was in IT operations at a private boarding school and we needed to start changing with the times into a more secure operations team. I was given the opportunity to be a leader in that venture, which led to me being hired by an MSP to start a cybersecurity program. That MSP was purchased by a new Cybersecurity startup (called Foresite). At the time the place Foresite needed me was as a pen tester so I learned that until the Compliance team was in need so I shifted to that. In my career I always say I just followed the path of least resistance and if something needed to be done, I raised my hand.

Molly Anderson, Director, Human Resources — Coincidentally, when I graduated from law school and passed the bar, PCI was born. The company I worked for at the time was required to be compliant. They handed me the standard and asked me to translate it into layman’s terms and advise on what needed to be done to comply. The rest, as they say, is history.

Marc Brungardt, President — My journey into the cybersecurity/compliance industry sort of happened by chance and has taken me on an exciting journey ever since.  I spent most of my early career in the electronic discovery/forensic industry where I was part of a team responsible for building a large national company with 13 offices and 500 employees. I worked on some of the biggest litigation lawsuits in the world.  Because of the highly sensitive case information that we dealt with; cybersecurity was a big concern that I found myself responsible for managing and is where my roots in cybersecurity began out of necessity.  After more than a decade building this business, we successfully sold the company.  Next, I joined a former colleague at a large global cybersecurity VAR where we built one of the preeminently recognized MSSPs in the world, which was acquired by NTT. Afterwards,  I spent a few years developing a cybersecurity startup out of Israel before co-founding Foresite Cybersecurity in 2013 leveraging the 25+ years of industry experience gathered along the way.

Matt Gyde, CEO — My first experience was operating security controls for firstly a large Australian corporate and then with Australia’s largest ISP. Early 90’s security was just becoming a thing and it mainly consisted of firewall configuration. Subsequently I joined Secure Computing, a manufacturer of security controls, and I have been in the industry ever since working primarily in the Security software, SaaS and System Integration space.

Dan O’Fallon, Partner Account Director — I had spent several years in the digital forensics space, and an opportunity presented itself for me to transition over into cyber security.  This proved to be a natural move being that computer forensics often ties into an overarching cyber security program.  While forensics is more reactive in nature, working in security allows me to take a more proactive approach in helping companies secure their environment and develop and maintain their security posture.

Alex Valezquez, Consultant, Offensive Security Team — I got into cybersecurity as many people do, it just started out as a hobby when I was a teenager and then developed into a paying job later on. The best part of the work is already having a preexisting interest in the subject matter.

What’s your favorite part of working in the cybersecurity/compliance field?

While there are many different types of cybersecurity careers, the most common things industry professionals say they enjoy about their jobs are problem solving and helping people. Here’s what a few members of the Foresite team had to say about their favorite part of being in cybersecurity and compliance.

Mike Barcarse, UX/UI Software Engineer — My favorite part of working in cyber security is solving problems that an individual might have.  Its like playing a video game.  You want to make sure that you build up your “fortress” so when an attack inevitably does happen you can witness all the countermeasures in action and feel secure.

Scott Dally, VP, Product — Cliché, but being “a mile wide and an inch deep” on everything. There is so much technology, and more is coming out every day. As a cybersecurity practitioner, you have to have some basic knowledge about ALL of it. Being an expert on anything is nice, but you have to know about everything. For me, I’m perpetually curious, so this fits well with my mind set.

Nnamdi Enechionyia, Sales Director — I enjoy learning and helping customers with security because it’s an extremely important aspect of technology that most people don’t pay enough attention to, and it will only become more important in the future.

Thomas Mark, Lead Tanium Engineer — I find it interesting how everything relates to security. The best security practices are founded in the best operational practices, and a breakdown in operations directly relates to a breakdown in security. Even geopolitical issues can be tracked in cybersecurity. When a nation state prepares for war, they now start hammering digital security, this can be seen in the Ukraine/Russia conflict. Russia has been digitally attacking Ukraine and companies doing business inside for years and I was able to watch it happen in real time and even respond to some of them. HR policies and decisions, financials, company spin-offs and purchases now must be tied directly to cybersecurity practices.

Brandon Sohm, Inside Solutions Architect — To me, it’s a puzzle...when in the SOC you are trying to make a picture and as a Solutions Architect, it is about making sure the client is taken care of and that their Security posture makes sense for the company. What’s your best piece of advice for someone who wants a career in cybersecurity/compliance?

There are as many ways to get into a cybersecurity career as there are different types of jobs. The military and higher education are often the most common, however many positions can be achieved through certifications and hands-on experience.

Ryan Berry, Product Engineer — Cybersecurity to me feels like a field that can really be self-taught if you put in the effort. There are a good number of resources out there for free to get you started in the field, then if you pursue one or a couple of the entry level certs you should be good to go.

Jason Humphreys, UK Managing Director — Don’t waste another moment thinking about it – go do it.  Be prepared to work hard and put in the extra hours to gain the knowledge and certifications you will need to help you grow.

Jonathan Major, Sales Director, Mid-Atlantic — There are so many different ways to get started and have an impact in cybersecurity.  I recommend connecting with as many current cybersecurity professionals across the industry to learn about their experiences and hear their passion and future for the industry.  Most professionals passionate about the industry will offer their time to assist newcomers to the field – they will also give you the “inside baseball” to the role and industry.  No shortage of demand for talented, passionate professionals to tackle the ever evolving, persistent threats attacking governments and industries.

Dana Morrow, Director, Security Services  — Some of the best advice I could give anyone considering a career in cybersecurity/compliance, would be to keep somewhat of an open mind. Just when you think you’ve seen or heard everything, a situation will arise or a clients opinion/perspective will challenge your approach/practice…

Chad Phillips, Sales Director – TOLA — Study the industry and learn the trends. Familiarize yourself with the vernacular and the acronyms. Work your network. Find a mentor and always be studying and learning.

Joshua Rock, Senior Security Engineer — Pick a path you think you are most interested in and follow that as there is so much you can get into starting out that you wont be able to specialize.

It takes all kinds of people to make a successful cybersecurity team and there’s no one type of personality that does well in a cybersecurity career. Check out what other careers the Foresite team could see themselves doing.

Thomas Allen — In a dream world I am a songwriter, I wrote and played in bands for a large part of my teens and twenties. Realistically – before IT I was a paramedic so had I stayed in that your career move is either to Fire service or up in medical, RN, PA something like that. I always say diagnosing is diagnosing, if it’s a human or a computer or a network. It all starts with knowing the right questions to ask and what your action should be based on the response to the questions.

Marc Brungardt — I would spend more time traveling and scuba diving.  Then, I would probably look to start or assist a new up-and-coming cybersecurity startup to scale their business.

Jason Humphreys — Playing the piano at a fancy beach bar.

David McKee, MDR Technical Lead — If I was not in cybersecurity, I would likely have continued working in manufacturing as a machinist (I did this for 8 years prior to tech).

Thomas Mark  — A while back I got burned out on the whole computer thing, too many workforce reductions, reallocations, stress, etc. So, I went back to school and started studying geology, the science of rocks. Rocks are nowhere near as stressful as geopolitical warfare being conducted against websites and computer networks. So if I wasn’t involved in computers I would be hiking the Rockies looking at cool rocks or drilling holes deep in the Earth trying to find oil.

Chad Phillips — Besides being a professional athlete?  Just kidding.  Honestly, I’m not really sure.   I enjoy sales, so it would most likely involve sales in some capacity.

Start or grow your cybersecurity career

Looking to start or grow your career in cybersecurity and compliance? Make sure to check out the current openings at Foresite by checking out our careers page and following us on LinkedIn!

Tristin Zeman is the Digital Marketing Manager at Foresite. For the past 10 years, she has helped organizations of all sizes create and scale marketing programs through digital and traditional marketing channels and efficient marketing operations. 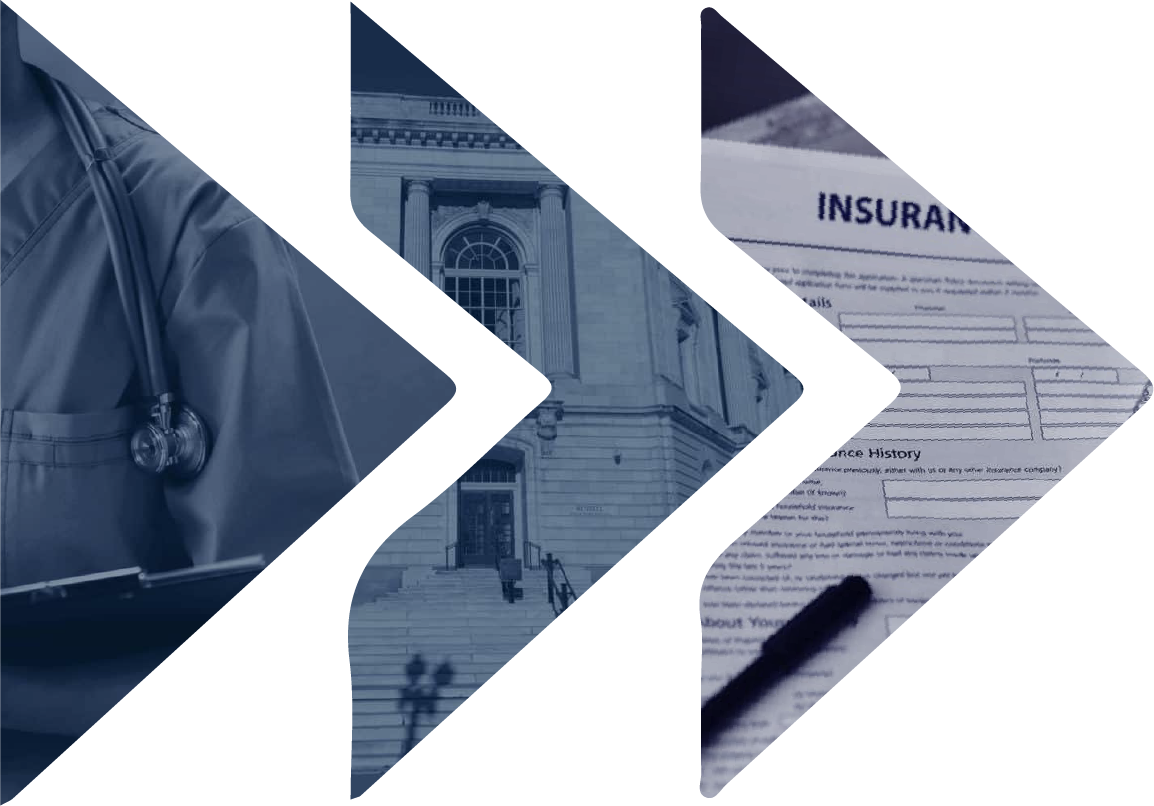